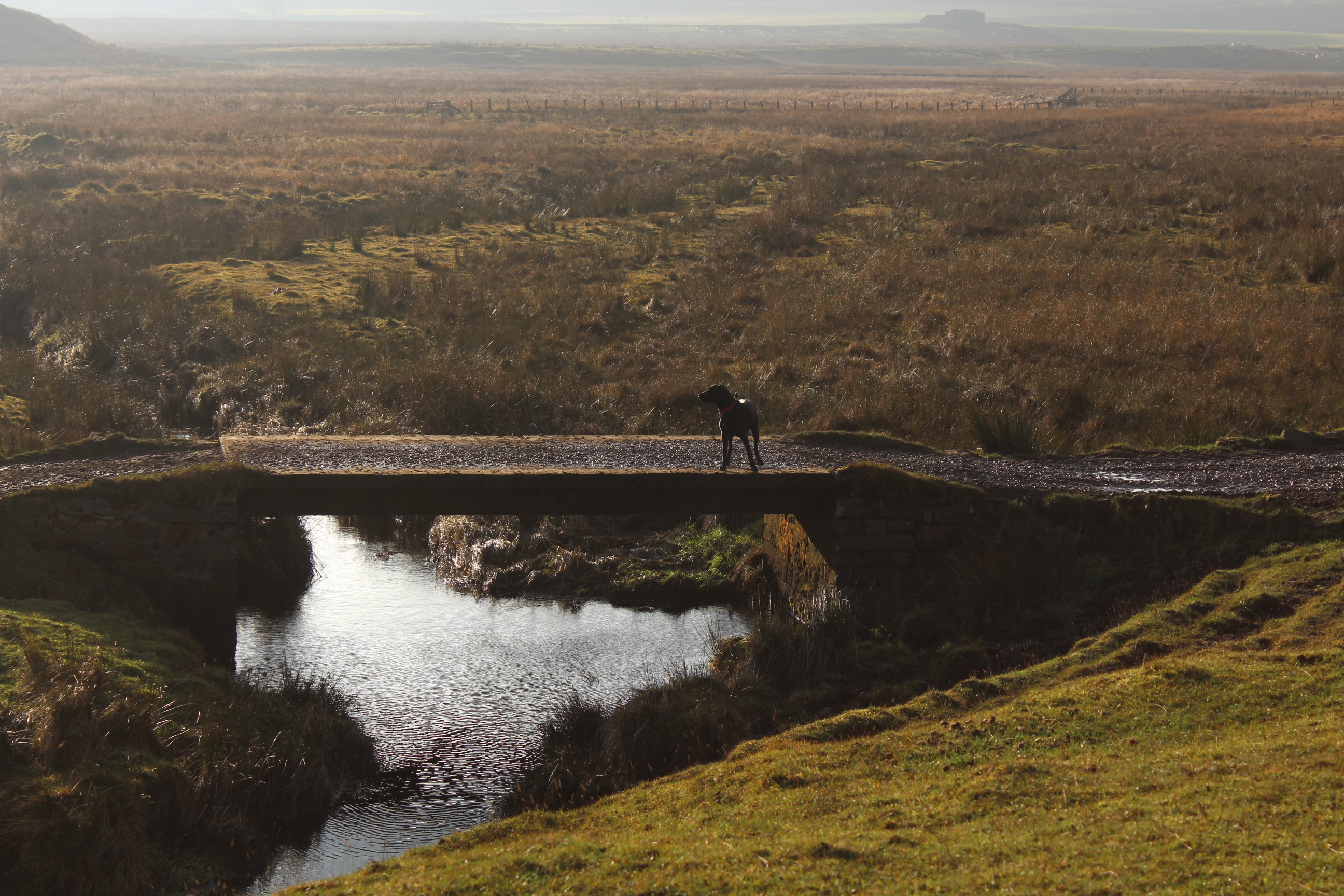 Duration: 4 hours, although I did get a little bit lost and confused, and factoring in time to take photos, you could probably do it in a little less time!

Difficulty: Moderate. I wouldn’t say this walk was brutal; it’s not particularly hilly but there are sections on marshy grasslands and some very muddy areas, which makes things difficult – and the distance too!

Terrain: Hadrian’s Wall! Also farmland, fields and moors. You’re not walking along any proper roads on this walk (after last week in Amble…)!

Dog-friendly: There was a lot of livestock along this walk. If your dog chases sheep, this might be one to avoid. There are large sections of the walk where sheep and cows are free to roam over fields and moors. I would definitely avoid this walk during lambing season, no matter how well behaved your dog is!

Start point: Brocolitia Car Park (NE46 4DB). You have to pay £4 for All Day Parking, but you can use this ticket at other Hadrian’s Wall car parks. I normally try to choose free parking, but the money from the parking does go back to Northumberland National Park.

Ever since we moved to the North East (over 2 years ago now!), I have wanted to walk along Hadrian’s Wall. It seems that we’re always a bit busy, or we get distracted by other places to go in Northumberland!

This walk was definitely one of the more difficult walks that Leo and I have done to date for Wild Walks with Wine, but I really enjoyed the “wildness” of this one. We did not see a single person throughout the whole walk, and only came close to a road at the very end! Unlike many of the walking routes that I’ve covered so far, there are long stretches of this walk that don’t have marked paths as they’re part of Northumberland National Park’s Open Access areas. So for the majority of the walk, it was just me, a map and a dog plodging over open ground!

The weather when I did this walk was cold but fairly bright for the most part. I would strongly recommend checking the weather before doing this walk; the route is very exposed and strong winds/rain would make it a bit unpleasant. As it’s winter, don’t forget to allow plenty of time before the sun goes down too! If you don’t like driving in the dark, allow time for this too as there’s almost no street lighting in this area of Northumberland’s Dark Sky Park. Unfortunately, it was cloudy this week, so no chance of stargazing! 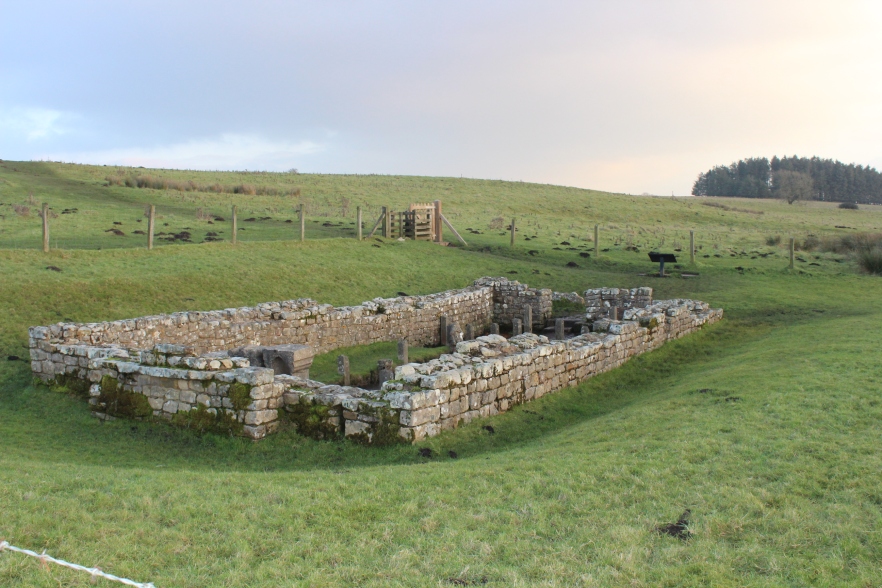 I parked at the Brocolitia Car Park, which is the site that holds the ruins of a Temple to the Roman God Mithras, dating back to the Third Century CE. Worshipping the God Mithras was common among the Roman Military between the First and Fourth Centuries, but unlike many of the Roman deity, little is known about the God Mithras and few stories survive.  After the initial excavation of the site in 1949, further archaeological work revealed a monument dedicated to the Goddess Vagdavercustis and a “Coventina Well”, where people went to worship Coventina, Goddess of Well and Springs.

Follow the Hadrian’s Wall Path (look for the acorn symbols) up to the road, cross over and continue straight along the farm track. You’re going to be headed in this direction for a little while, and it is Open Access land across a lot of it. You reach a farm on your right, with a funny shaped house with odd-looking turret-like gable ends. Follow the path round to the left towards another farm, but loop around the dry stone wall. Watch out for sheep here, you’ll probably need your dog on the lead!

You’ll soon come to Simonburn Common, where you will probably be better equipped with a map and compass as the path is very difficult to make out across the boggy heath (although I did notice I had 4G phone signal). There are small streams running across, and you’ll need to pay attention to where you’re putting your feet! Interestingly, a light aircraft crashed here in the 1950s. It was carrying the Durham University Boxing Team to Dublin and a build up of ice caused it to lose power in both engines, crashing down on to the Common. Everybody on board survived though!

It’s very muddy in places up here, and the views are spectacular. You really feel as though you’re out in the wilds of Northumberland, and you can appreciate the natural beauty of the place. It’s tough going underfoot, with mud and very soft ground for quite a long way.

There weren’t many sheep along this part, or birds, or much of anything really, until you get to a stretch of farmland on your left. Keep going past the sheep’s fields and cut left down towards the farm afterwards. Follow the farm track around, you’re heading towards the crags in the distance.

When you get to the farm, sneak through diagonally (I felt like I was trespassing but it is a ‘restricted byway’) and continue along the track over the fields. There are a lot of sheep around here – sorry pooches! I think next time I do this walk I’ll get one of those longer, extendable dog leads so Leo can roam a little. Saying that – the sheep were not bothered at all by him – I think he was pretty confused by being introduced to a (huge) sheep!

As you follow the track around, surrounded by sheep and cows, you can see the Sewingshields Crags on your right. This was once the site of a castle, in which, legend has it, King Arthur lived! In nice weather, I think I could get a really great photograph of these, but it was a little dark down in the valley and the sun was already dropping low in the sky – that’s what you get for heading up here in the middle of December I suppose!

As you reach the top of the crags, theres a small cottage on your left, and a sign for the Hadrian’s Wall Path! No need for map and compass from here – you’re going to follow this path for the next few miles, all the way back to the car park!

This section of Hadrian’s Wall has few remaining ruins of the wall, but it there is a couple of Turrets and Milecastle 34 that are there for you to see! If you want to see more of the wall, you’re probably better heading further along towards Housteads Fort, where you can do a shorter, circular walk covering a different section of the wall along to view Sycamore Gap, the iconic tree between two hills. I’ll definitely be doing that walk at some point in the new year!

Despite the majority of this part of the wall being lost to history, there are still some ramparts left, marked with small information signs (that are also falling into disrepair!). I loved this walk simply for it’s wildness and unspoilt scenery; it gives you that feeling of being so small in comparison to nature.

When we got back to the car it was almost getting dark. The walk had taken slightly longer than I expected, as it was quite tough in parts. We drove along to The Twice Brewed Inn for some food, and of course, a small wine! There’s a write up from there in the pubs section of this website.

Thank you for reading this post. If you enjoyed reading this walk, please have a look at the other walks in Northumberland, Yorkshire and the Lake District. If you manage to do the walk yourself, please let me know what you think! And if you get a decent photograph of Sewingsheilds Crags, I’d love to see it.